You are here: Home1 / Pancake Breakfast

Serving The Community Since 1971

Each year during the beginning of October, the Tracy Firefighters Association (Local 3355) and the Tracy Fire Department hold their annual Pancake Breakfast as a way to raise funds for local charitable organizations and raise fire safety awareness throughout the community.  The 2019 event will be the 46thof its kind. The first Pancake Breakfast was held back in 1971.  It was originally held on the first Saturday in the month of May.  Many years ago, the event was moved to the second Saturday in the month of October, tying it in with National Fire Prevention Week.  Advertising for the Pancake Breakfast has traditionally been through billboards, by word of mouth, and through the Tracy Press. In addition to those methods, we are now able to use various social media platforms to spread the word. The Pancake Breakfast was normally held at old Station 91 at 835 Central Ave. In 2004, it was held at Station 96 due to the massive renovation project underway on the old station to turn it into our new Fire Administration Building. The following year, it was held at the new Station 91 on 11th Street. The event was recently returned to 835 Central Avenue where it all began back in 1971.

Each year the Pancake Breakfast brings roughly 2,000 people together, reminding us of just how strong our community is in support of their fire department. We usually begin very early in the morning and are continually amazed at how early our citizens arrive hungry and ready to eat. The pancakes are served hot and delicious, and typically come with butter, hot syrup, sausage, fruit, coffee and orange juice. Traditionally, the newest members of the fire department, or “probies”, are charged with organizing and coordinating the Pancake Breakfast. Those who oversee the event typically divide the responsibilities amongst themselves and enlist the help of other department personnel, Reserve Firefighters, and particularly our Fire Explorers, to assist with the various assignments associated with the festivities.

Each year, we gather together the day before the event to do a “sausage pre-cook” while enjoying each other’s company. We also retrieve all the necessary equipment (tent, tables, chairs, griddles, propane, cooking utensils, paper goods, plasticware, etc.) which is either rented locally or kept in our nearby storage unit. It takes a lot of coordinating and many hands to successfully pull off this undertaking each year. Local 3355 members arrive early and eager to man the griddles, keep the syrup dispensers full and make the continual coffee runs. 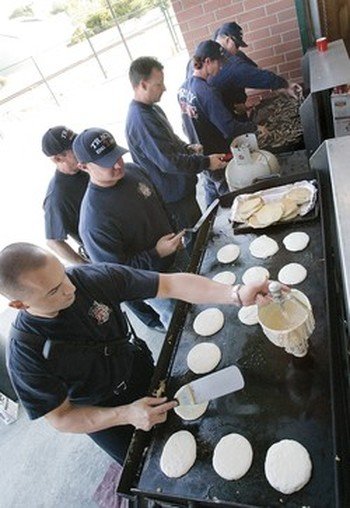 Many forms of entertainment and safety demonstrations have been incorporated. For many years, department members would perform a live vehicle extrication demonstration, give fire extinguisher training or take kids through a Junior Firefighter Combat Challenge.  The Pancake Breakfast t-shirt is always a popular item. Sparky the Dog has also been known to make his annual appearance to greet the customers, hand out stickers and have his photo taken with citizens of all ages. Each group of probationary firefighters enjoy the leeway of incorporating past activities and/or bringing in new ideas for engaging with the public. Fire apparatus and on-duty crews are also on-hand for the public to interact with. 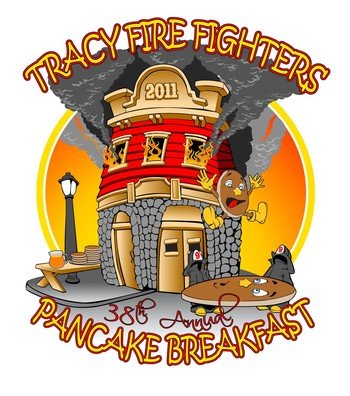 Without the community’s support, the Pancake Breakfast would not be the success that it has always been. The majority of the food, condiments and beverages are donated by local businesses. Some of the local charities benefiting from the proceeds of the event have been St. Bernard’s Church, The American Legion Post 172, The Moose Lodge, The McHenry House, and the Boys and Girls club, just to name a few.  The Tracy Firefighters Association and South County Fire Authority (SCFA) continue to serve our community with pride, honor, integrity, and of course, pancakes.