You are here: Home1 / About Us 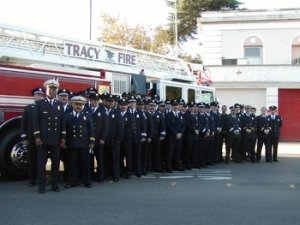 Prior to joining the IAFF, both the City of Tracy Fire Department and the Tracy Rural Fire District were part of the California State Firefighters Association (CSFA). Both agencies utilized CSFA sponsored labor negotiators during their respective contract negations. On March 1, 1991, the City of Tracy Fire Department joined the IAFF, receiving the designation of Local 3355. Barry Elting served as the first union president. On November 28, 1995, the Tracy Rural Fire District entered the IAFF and became Local 3677, with Greg Boswell serving as the first president.

Though Tracy City and Tracy Rural initially established two separate, distinct locals, the consolidation of 1999 united them as one. The newly merged Tracy Fire Department was formed as the Tracy Fire Fighters Association (TFFA) retained the lowest number as their designator, Local 3355.

The local is actively involved in the Tracy community. The Pancake Breakfast, which has been held annually for over 45 years, helps 3355 raise money that is distributed to local charities. It is also a way to connect with members of the community, demonstrate fire and rescue tactics and equipment, and educate the public about home fire safety. The local also participates in the ‘Brighter Christmas’ program –purchasing and delivering gifts and groceries to struggling families.