You are here: Home1 / About Us2 / Daniel Havicus Memorial Page 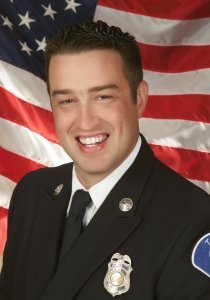 January 18, 2017 at Stanford Hospital after developing an unexpected illness. He fell ill January 8th, while on shift.

“Havi” graduated from Tracy High School in 1993. He then began pursuing a career in firefighting, attending San Joaquin Delta College, where he earned a degree and graduated from the fire academy.

He began his career with Tracy Fire in 1997 as a reserve firefighter, and gained full-time status in 1999.

A 17-year veteran with our department, Havi is survived by his wife, Courtney, and his four children, Karlie, Jonathan, Sage and Paisley.

There is not a day that goes by that he is not missed, thought of, or talked about. He left a positive impact on this department in so many ways. We will continue to make him proud and grow this organization with his ideas in mind.

We miss you Havi and your family will forever be in our hearts! Rest easy brother.

Click on the link below for audio of the South County Dispatch Last Call for Captain Daniel Havicus as his motorcade drove through Tracy one final time. Rest In Peace Havi….